LANCASTER – It was a big day at the new Gregg Anderson Academy as Westside Union School District welcomed public officials, local community leaders and the late Gregg Anderson’s family to a ceremony Friday morning to commemorate the school’s opening and to honor its namesake.

The program included remarks by Board Members and local public officials; students of various grades also performed songs and recitations for an audience of parents and community members. 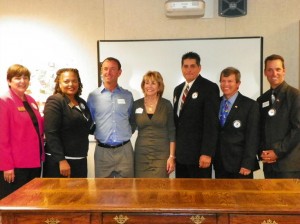 (L to R) Superintendent Regina Rossall, Board President Linda Jones, Ron Anderson (Gregg’s son), Janice Anderson (Gregg’s wife), Board Member John Curiel, Board Member Steve DeMarzio and Assemblyman Steve Knight
Gregg Anderson is Westside’s newest STEM school, with a curriculum that emphasizes Science, Technology, Engineering and Math. The campus employs advanced technology in the classroom, including new computer labs, Smart Boards and other high-tech classroom materials. Students will receive training in the use of this technology to help prepare them for the challenges of the future.

“STEM is so important,” said Congressman Buck McKeon of the 25th Congressional District. “Especially in this Valley, people understand that.”

McKeon said he loves to see the excitement in all the students. “They are still believing they can do and accomplish anything. They are our future,” McKeon added.

Speakers highlighted the life and legacy of the late Gregg Anderson and the influence his name will have on the students.

“The life of Gregg that future students will learn about is threaded in hard work,” said John Curiel, member of the Board of Trustees. “He set goals, achieved them and then set new goals.”

Curiel expressed to all the students the importance of following Anderson’s example.

At the end of the ceremony, students and attendees gathered outside for a balloon release to honor Gregg Anderson. 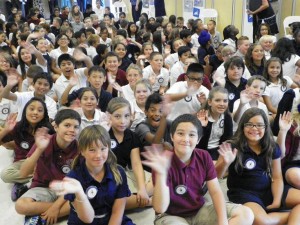 As the students released their balloons into the sky, they recited Gregg Anderson’s favorite quote, “Can’t never could!” This school was named after Gregg Anderson in hopes that the students would look up to his drive and dedication, seeking to mirror this in their own lives. “He truly was committed to excellence,” said Tom Lackey, Palmdale City Councilmember. Gregg Anderson passed away in December 2009, about a year and a half after the groundbreaking for this new school. “The importance of Gregg Anderson Academy to the Antelope Valley cannot be overstated, said Westside Union School District Superintendent Regina Rossall. “The school provides an opportunity to prepare the next generation to lead us into the future of more advanced technology and aeronautical study. Westside continues to deliver excellence to our students because they are the future of the Antelope Valley.”